In Las Vegas, sportsbooks offer bets on how many points the favored team will beat their lesser opponent by.  They call this point differential the spread – the distance in points between the final score of the winning and losing teams.  When the underdog pulls off a surprise and loses by less than what the sportsbooks thought they’d lose by, they call this covering the spread.  When the dark horse team actually wins, people frequently say that they MORE than covered the spread… and that’s what we have in this deck today: the underdog who excels in upsetting its highly favored opponent.

I have 19 W and 7 L with this deck so far, but it has actually gone an incredibly surprising 6 W 1 L against meta decks.  Here’s the decklist: 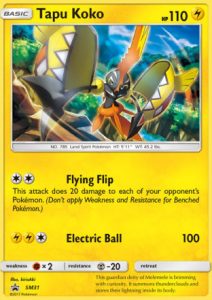 In a perfect world, you go second and Flying Flip for twenty across the board on your first turn.  Maybe you’re even fortunate enough to get Po Town out so that your opponent starts compounding damage with their Stage 1 evolutions.  Po Town helps add that many more damage counters to the board.  Every counter matters – a little bit every turn adds up to a lot by the end of the game.  I’ve actually had games where the opponent could not evolve their last Pokemon to attack because doing so would actually KO that Pokemon.  That doesn’t happen a lot because of the difference in HP between Stage 1 and Stage 2 Pokemon, but it has happened a couple of times. 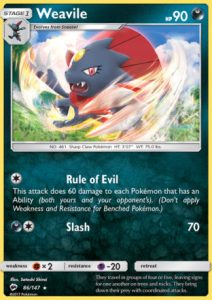 Usually around turn three (but sometimes on turn two), you have developed a Weavile on the bench and get the opportunity to choose between whether you want Weavile or Promo Koko spreading damage around the board.  I’ve found that in today’s ability abundant meta, Weavile frequently puts more damage on the board than Koko.  However, if you can hide Weavile for a couple of turns, your opponent may come to regret that Octillery or Oranguru they dropped down onto their bench – two Rule of Evils will KO both of those Pokemon.  You definitely want to lead with Koko and then bring Weavile in off the bench … with Aegislash coming in late to finish your opponent off.

I actually don’t even get to use Painful Sword that often – my opponent usually concedes.  But when I do – wow – sometimes I take six or even seven prize cards to end the game. 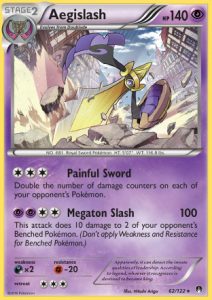 I’ve tried to make Aegislash work for a long time now, and I think this deck might just do it.  One thing I advise: work to get two Aegislash set up.  Your opponent will usually try to Guzma one of them up and KO it before it can use Painful Sword.  Painful Sword doesn’t have to come last – it’s just best (most dramatic) if it does.  It happened in one game that I used it and didn’t actually KO any of my opponent’s Pokemon.  However, I got a Weavile powered up in the next turn, and the threat of Rule of Evil caused him to concede.
I had previously used Necrozma GX in this build (and Tapu Lele GX with Mr. Mime to protect), but I found that the bench would get too clogged.  Plus, I sometimes had to choose between Mr. Mime and an attacker I might need.  Taking out Necrozma and Lele means I don’t have to worry about any collateral damage or potentially taking myself out – my opponents have an easy enough time KO’ing my Pokemon as it is.

That is the downside to this deck – your Pokemon always get OHKO’d.  That, however, is where Counter Catcher comes in.  I want to fall behind in prize cards – I want to be losing early so I can use Counter Catcher to pull a heavy bench sitting Pokemon into the active.  If you can strand a non-attacking Pokemon in the active for even a turn or two, that can devastate your opponent.

Moreover, by falling behind, you activate Counter Energy to its fullest potential.  Counter Energy basically gives you eight DCE in this deck.  That’s the other beauty of this build – every attack is Colorless.  Only Painful Sword requires two attachments.  Also, if you need to, Counter Energy allows you to use Electric Ball, Slash, or even Megaton Slash.  You can transform your deck from a spread deck into a deck that can actually do some damage to the active Pokemon. 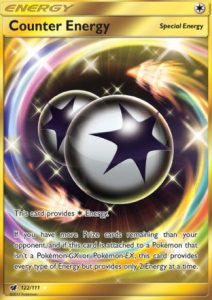 While these attacks top out at 100 damage, that can suffice to KO even GX and EX Pokemon because they’ve already accumulated a ton of damage counters from earlier in the game.  Sometimes your opponents limit their benches to counter your strategy.  By having the option of focusing damage on the active, that forces them to bring out more Pokemon than just the one big attacker in the active.  And shout out to my friends out Pojo.com for voting Counter Energy as their number one card out of Crimson Invasion – this might be the deck that actually proves the card’s value.

Below are the matches I played with the deck.  I was extremely surprised at how well this deck performed, especially against top tier decks.  There are some holes in the deck – the aforementioned Mr. Mime being the most notable.  While Koko and Weavile have free retreat, Aegislash has a very heavy three retreat cost, so if he gets stuck in the active, he might be there for awhile, letting your opponent comfortably go about his normal development without having to worry about the turn by turn increase of damage on his side of the board.  But overall this is a good deck – and it might just be more than that.  It might do more than just cover the spread – it might just be that underdog rogue deck that can actually win against top tier competition.