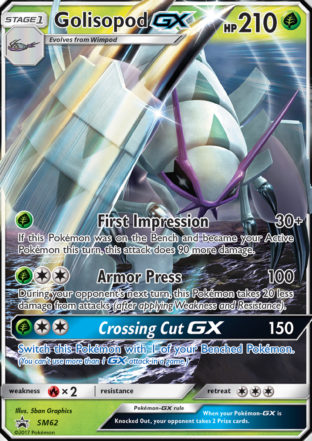 Just think about it – a giant freaky metal cockroach and a living pile of grotesque garbage – wow that’s an awful, disgusting, gross pairing of two Pokemon… and that’s what my opponents pretty much thought as well, considering I went 19 W 6 L with this over 25 games in the past couple of days (ah finally got some time to play again).  I will say that the caveat here is that I only faced four meta decks in the 25 games I played, and two of those were against Mike, and I know we were chatting a lot and maybe not as focused as I think we both had a couple of misplays.

But still, this deck is very good – there’s a reason it came in second at Memphis, and I bet if Pram and Azul went at it again, it would surprise me if Pram came out the winner a second time.

My deck list is significantly different from his, however.  We actually only have 34 common cards.  Here is my list:

I know what you’re going to say: where’s N?  I just can’t bring myself to run it.  I don’t know how many Cynthia I’m going to put in the deck – maybe none – but I know I will not put N in this deck.  I’m not giving my opponent extra cards or a hand refresh early in the game.

I do only have five draw support cards –  I really use the Ultra Balls as quasi Random Recievers to the Sycamores I need.   I didn’t keep official track, but I’m sure I Lele’d for Sycamore more than anything else outside of Brigette.  This is definitely a weakness, however, and I would guess that I would tech in at least one Cynthia after Ultra Prism comes out.  Lillie had the highest proportional frequency of play (average number of times played / card count) at 57%, but I don’t think I’m going to tech in another Lillie because I would guess that I mostly used it on turn one.

I am running GRI Garb.

It hit the bench in 13 out of the 21 matches where I tracked the cards I played (I didn’t track the three I played against Mike because we were chatting and I donked one player on turn two and didn’t bother to count what I played for that as well).  It had a 33% play rate, and that puts it in the middle of the pack as far as proportional frequency of play goes (10th out of 18 different cards).  The matches where it hit for 200 plus damage stick out greatly in my mind, but maybe it might have served even better as a disincentive for playing Item cards.  Maybe in some of those matches it worked as a soft, unofficial Item lock that inhibited the decisions of my opponent.  At the very least, every second you spend thinking about Trashalanche is a second you’re not spending on how to beat me.

Choice Band was the second most proportionally frequently played card at 48%.  I’m definitely going to add another one.

I am going to drop all four Enhanced Hammers as well.  I love them in the current meta right now, but I think our dalliance with Special Energy right now will come to a quick end with Ultra Prism.  The way I look at it right now, there’s going to be a lot of Metal at Collinsville, which means there’s going to be a lot of Volcanion to follow.  IMO this means that there will be a lot less SPE.  I think we’ll see a significant drop from the insane amounts of SPE we’re currently seeing in the top tier decks.  Plus, their proportional frequency of play was 18%, the second lowest.

What was very surprising to me that the only card lower was Guzma.  It had only a ten percent proportional play rate.  I played it in only five of the 21 matches I tracked (and really 22 because I know I didn’t play it in the match where I donked the other guy early), and I only played it twice once.  I’m definitely dropping down to two Guzma, and I might even go down to one.  This would be a prime candidate potentially to swap in a Cynthia and go down to a single Guzma.  I know, it’s insanity, but I just haven’t played it much.

Special Charge was 14th and had only a 26% proportional play rate.  I’m going to add two Grass energy and drop one of the Special Charges.  I am considering dropping Energy Loto, though, since GRI Garb didn’t attack much.  I could drop those four, add in a couple more Grass energy, and maybe a couple of other fun cards too.  Not sure about that though, as it definitely helps me grab DCE.  I’m keeping Loto for now but will definitely think about swapping it out.  It had a 37% proportional play rate (ninth overall).

Brigette had the second highest proportional play rate at 48%.  I just can’t add a second though.  It’s great to have turn one, but rarely gets used outside of that.  I just don’t need it that much.

The final card that probably most people would consider a surprise is Super Scoop Up.  I love this card, even though it only has a 30% proportional play rate (twelfth overall) and will NOT reduce the count of this card. 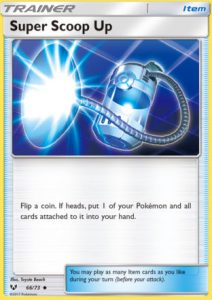 It can help SO much, and not just picking up damaged Pokemon.  You can use it to pick up something in the active so Golisopod can come in and hit for 120.  You can use it to pull a Float Stone off of Garbodor so you can then play Lele again to get a Guzma or Acerola or Skyla or whatever else you might need.  But the most fun way I love to use it: turn one play Lele for Sycamore.  Then play SSU and if you get lucky you can then play Lele again and go get Brigette.  This didn’t happen a whole lot, but it was awesome when I did get to pull it off and has to be a devastating mental blow to your opponent.  SSU is the secret weapon in this deck.  I’d highly recommend testing four of these in any meta deck you’re running – it might really surprise you.

So here’s my new decklist, post changes from tracking and with suggestions from my notes:

In my notes, I commented that I needed Evosoda multiple times.  There were a number of times when I just couldn’t get the Stage 1 Pokemon I needed, whether it be Garb or Golly.  I also noted a couple of times where I could have used a couple more Grass energy.  Again, I’ll probably swap a Special Charge for a Cynthia when it comes out, and I may drop the Energy Loto in favor of something else, but this is what I’m sticking with now, and I’ll update you on how the new version does later in the week.