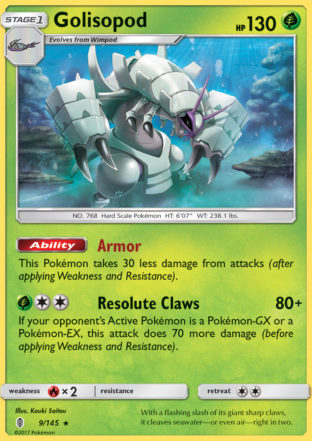 Got a request for a baby Golisopod decklist from Juan, and I couldn’t find any recent ones out there … but when I went to look for Golisopod, all of the GX lists came up as well.  So I decided to throw this one together.  I’m not sure it’s a great list, but it didn’t do awfully going 6 W 4 L.  I will say the best win was a demolition of Tapu Bulu GX, and it also beat a Ho-Oh GX / Volcanion deck, but I think my opponent had just a terrible start in that match, and I had a great start that I’m pretty sure caused him to concede early.  It went 2 W 2 L against meta decks, losing to a Zoroark GX deck and a Ho-Oh GX Salazzle GX deck.

There are definitely some alternatives that might make this deck better: Sunny Day Lurantis, Body building Dumbbells instead of Choice Band, and maybe even taking out the DCE and trying to use Max Elixirs and Wishful Baton, but I’m doubtful on that last option, however.

The big problem for the deck is the energy attachment.  If you don’t have the right kind of energy or miss an energy altogether, you fall behind and just can’t catch up.  Maybe it might pair better with Vikavolt, but then you’re putting a lot of Pokemon on your bench, and I strongly believe that every deck will need to carry only one support Pokemon at most after Ultra Prism comes out.  Once Cyrus hits the meta, you have to be prepared to have an attacker in your active, an attacker on the bench, and one support Pokemon at most.  And in many cases you’ll want that support Pokemon to be Zoroark GX because after Cyrus puts all of your other Pokemon in the deck, it’s going to be tough for you to find draw support.

But I tangentize again, so let me just say that while I don’t know that this is the best decklist for baby Golisopod, I at least had some success with it, and it could very easily be worth additional experimentation in the future.