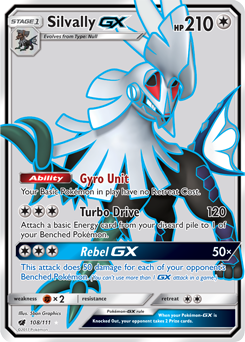 There are a few themes in a good Pokemon TCG deck, no matter what era. While draw power is the most coveted property of the game (why else would anyone put this monstrosity in your deck), I would say that energy acceleration is second on the list. Most good attacks rely on a decent amount of energy, and there is a limitation on playing energy from your hand. Factor in that a knocked out pokemon losses all that energy, and it’s clear whoever wins the energy battle wins the game.

Hence give any card the ability to circumvent the one energy per turn limit, and you’ve have a card that will become the framework for a deck. In the current meta there is Volcanion, Vikavolt, Metagross GX, Gardevoir GX, Darkrai GX, Dragonair, Rayquaza, Registeel, Yveltal, etc. Then there’s cards like Max Elixir, Dark Patch, Exp. Share, and Wishful Baton which help improve or maintain the energy on your pokemon. 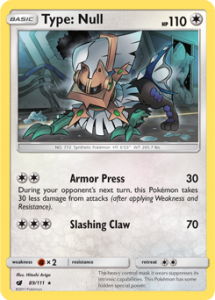 So when it was released, I thought Silvally GX would be a hot card. It’s main attack does 120 damage while placing an energy from the discard pile onto one of you bench pokemon. Clearly the potential is there for this card to be an important cog in its own deck. Silvally GX evolves from a hearty basic (“Type: Null” 110 HP), and it’s GX attack can deliver 250 points of damage.

However up to this point, Silvally hasn’t been used to its maximum ability. The only decks I’ve seen feature it were either with Volcanion or a part of the metal toolbox. The latter I’m going to ignore, since this was just a product of Gardevoir GX gone wild. And the former is just a bad idea. First, Volcanion and Silvally skills overlap, so they don’t add much to each other.

Even if you do manage to get 3 energy on a benched Volc, it’s only doing 100 points of damage, which isn’t a great deal for that amount of energy. Normally that attack is enhances with Volcanion EX but if you’re going to go to that length, you might as well just make a proper Volcanion deck and chuck Silvally for Turtonator or Ho-Oh GX.

Given that I find these pairings for Silvally to be lacking, I took it upon myself to find an ideal partner. And I believe I did in Xerneas! 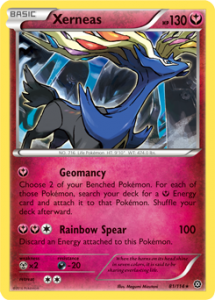 Xerneas can accelerate energy from the deck, while Silvally GX uses the discard pile. In an ideal setting, this makes Xerneas the first attacker setting up the field. When and if your Xerneas gets knocked out, you’ve got 2 energy in the discard for Silvally to re-distribute to your bench while doing 120 damage per turn.

Unlike Volcanion, Xerneas BREAK feeds off this energy acceleration linearly, given that it’s attack does 20 points of damage for each energy on your pokemon. So while Volc is hitting for a max of 100, Xerneas’ limitation is 20 x the energy in your deck.

However there’s more synergy in this deck than this nifty combo. Throw in Fairy Garden, and you’ve made a deck that can mix & match its attackers. If your opponent damages the active pokemon, use fairy energy to retreat for free and bring another pokemon to the forefront. So not only are you conserving energy with Silvally’s, but you’re making it difficult for your opponent to knock out a pokemon, which also conserves energy. And the more energy on the board the more powerful your Xerneas’ attack is, so the circle is complete.

Oranguru serves a dual purpose. Not only does it provide a small amount of draw, but it can turn into an attacker if needed. At worst, it can hold energy like a battery for Xerneas. (And it easily retreats with Fairy Garden and/or Silvally GX’s ability.) In this deck I added 4 fairy drops, which is another tool to make it difficult to knock out one of your pokemon. However you can use this space to fit your needs. One suggestion is Psychic Memory, which allows Silvally GX to hit for weakness in some matchups.

What you end up with is a deck that is strong and tough. Not only are you able to evade attacks, but with Xerneas BREAK and Silvally’s GX attack, you have the ability to do a tremendous amount of damage and OHKO just about anything. This is definitely a better match for Silvally GX, and I’m a bit surprised this isn’t out there in the meta.