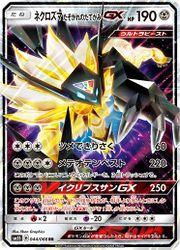 decks receive a TON of support from Ultra Prism.  No particular type got more love from the designers of PTCG than

.  We’ve already featured Alolan Dugtrio and written to the potential brokenness of Dialga GX, but there’s one other deck coming out of Ultra Prism that might rule over all.

Yeah it’s pretty intimidating.  And it has plenty of new friends to help it out.

Suddenly, it’s not very hard to get DM Necrozma or Dialga powered up.  So I used to say, 160 or 220, those are great numbers, but if you can only use an attack during one turn and aren’t able to attack the next turn, it really only does 80 or 110.  However, in today’s game where Acerola, Max Potion, and (my favorite although nobody else has figured it out), Super Scoop Up can completely waste a turn by removing all damage from a Pokemon, I’m starting to think that using a turn to get powered up isn’t such a bad thing – as long as you KO your opponent’s feature Pokemon during the turn you attack.  And you don’t necessarily have to lose a turn between attacks either….

Again, we won’t really know until we spend some time playing, but I would think that ten or twelve would be the best number.  I don’t think eight will be enough – you just won’t be able to find enough energy – but 14 or 15 would be too much, there just won’t be room.

Overall, this is going to be a really good deck.  There’s no question.  I believe that it will even do well against Volcanion because of Timeless GX and Cyrus.  I will definitely be testing this, and it’s definitely on the short list for Collinsville.