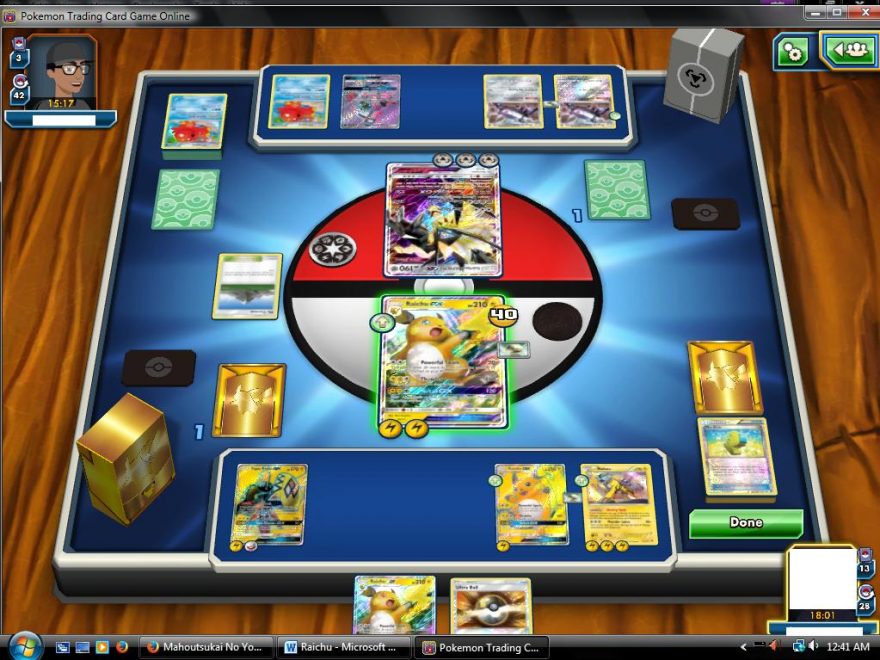 As my first article on Pokedeck Central, I wanted it to reflect who I was as a player: casual, lax, solid, but not engrossed in being the best there ever was. So for those that seek a deck that will take top 32 at regionals…you’re probably not going to find it in this one. For those that play the game for fun and for those online only trainers that want a nice deck to complete Lightning Challenges on PTCGO, read on!


Now this build in particular is a modified version of the one that DarkIntegral played with months back during the Shining Legends debut (https://pastebin.com/6xfUnTcE). And while I played with his build for a time, I gradually fiddled with it on and off until it became something like the one showcased here, with a bit of Supporter update in the form of Cynthia from Ultra Prism. To give a bit of my personal experience with Raichu: without any prior update to his build, I went 12 W 5 L overall. Then when Crimson Invasion came out, more specifically the Xurkitree GX promo, I made a bit of room in the deck for him and the Raikou from Breakthrough, going 20 W 8 L, which was neat. As for my updated build: it’s at 4 W 1 L (which you will see shortly).
I might not be able to grant a heavy insight to this particular build, but basically the goal of the deck is this: setup the board, accelerate energy, swing and take prizes as soon as possible, simple Turbo deck strategy.
Best turn one you could have is basically Lele for Brigette, getting down your Pikachu and other basic mons, and from there play the deck out, Max Elixir onto your Pokémon, and so on. It’s a very dry response I know, but I will offer the following tips:

Lastly, I need to talk about the Raikou in this build. I’ll be honest, out of all the Pokemon I used, both Raikou (the Breakthrough and Shining Legends Raikou have not seen a good amount of play throughout my time using this deck). However, I would suggest leaving them in for the following reasons.

Side note: this deck does make use of the 70 HP Pikachu to avoid easy knockouts, but if you do not have access to this one, you can absolutely use any Pikachu to your liking (preferably the one that paralyses).

So with all that said, onto the few games I had with the updated deck, all back to back (without omitting losses).

Game 1: Glaceon/Zoroark. I took the win here. Basically my opponent missed the DCE attachment needed for Glaceon on turn two to really wreak havoc on my field, and from there my Pikachu went on to become a Raichu, Choice Banded and all, and with a good amount of energy we went off at 150 damage. A two shot on all his ‘mons. So how did I win against this hyped up Ability Lock? I went first. If he had gone first…oh my goodness would it have been an uphill battle. I basically made the best of my first turn by playing Pikachu, attached, N’ed, found Lele, played the Lele down and grabbed Brigette. From there I had to hope that I was N’ed back. And we weren’t: Got down Oranguru and gang and I felt pretty good with our odds. Plus one turn of paralysis by the mascot of the franchise during turn two contributed to the win.

Game 2: Garchomp/Lucario. Boy do I regret not looking at his list. He basically had out Lucarios and Garchomps, but the twist here is that he not only ran the DragonChomp, but also Breakpoint’s Garchomp and trust me: I got spooked (he could’ve OHKO’ed Raichu with Bite Off just with a Choice Band mind you). Here was an instance where my opponent should have won but made crucial mistakes. For one: he could’ve taken away all my momentum the instant he got up two Lucario and his FightingChomp. I was literally looking at his side like, “All you have to do is get Choice Band, attach, and attack. Grab that Field Blower and remove my Exp. Shares, one-shot my Raichu”…. None of that played out during the times that would have sealed the game in his favor.

I managed to take out two Fighting Chomps and then came the decisive last turn of the game:  my opponent Counter Catchered my benched Xurkitree GX, Field Blowered away one Exp. Share and a Float, and proceeded to retreat out into DragonChomp. He played Cynthia that turn, but I was like, “I know what you’re doing: you’re planning to take out my wounded Raichu with Quick Dive and follow it up with another knockout when you have the chance.”  He Royal Bladed my Xurkitree while having special energy on his ‘mon…. my opponent realized this and conceded from there. I humbly accepted the win (I know what it’s like to make mistakes in matches, and it hurts.  Hurts when you realize it, hurts more when you reflect upon it. But that’s how we get better….I know that because I still kept my first non-theme deck build online, and boy was it all over the place).

Game 3: Buzzwole. He got the perfect setup going and weakness was going to devour my mice alive….moving on.

Game 4: Dusk Mane. I took this one. WHAT A GAME!!  My opponent from beginning to end had my heart racing. At some points of the match I wanted to concede, but there was this thrill, this excitement that kept me going. Even after my opponent Timeless GX’ed me and took 3 prizes with Dialga, I did not concede: I was legitimately having fun.

So how did the game shift to my favor…honestly, I couldn’t recall, though I want to believe that it was the turn in which I Field Blowered his first Mt. Coronet and either a float stone or Choice that turned the tide of the game. But in the broad scope of things: my opponent either ran out of energy, or did not have the Choice Band he needed to finish the game (Since Raichu is a 210 GX with resistance to Metal, Meteor Tempest would have been 10 short of a knockout, and had he Abyssal Handed, he would have decked out, as shown by my screenshot. So after a Claw Slash for 40, what had to end the game right then and there were two more attachments on my part. I had an energy, but that wasn’t enough. Before my opponent completed his turn, I was prepared to Lele into a fresh hand to help me dig for of one of my unused Max Elixirs, but as soon as my turn came around: I top decked my Max Elixir. I took a gamble, and it got me the attachment onto Raikou. From there I attached to the other Raichu on the bench and at 200 dmg, Dusk Mane went down. Major props to my opponent: that game was the best that night, hands down.

Game 5: It was a short match, but I knew my opponent was running Raichu GX, only his was the Pachirisu variant (with Snuggly Generator). This was my win, but only because my opponent couldn’t set up his board (had he gotten out the Pikachu and more of the Pachirisu, the game would have been a close one, or even a landslide victory on my opponent’s part. I’ve yet to try out the Snuggly Generator Variant, but I feel more comfortable with my own build for the time being. And thus ends my 5 game reports.

Raichu GX…it’s a fun, simple GX that can easily be used as the focal point for a player starting off in the TCG (just cut Lele for more Nest balls and maybe some Evosoda if you would like a more budget friendly build).

Only problem is the Fighting types are dominating the meta. Buzzwole and Lycanroc both make quick work of this deck, and even non-meta based decks such as Fighting Bewear and Machamp GX demolish Raichu with little effort. It also doesn’t help that Parallel City, Sylveon, and Cyrus can drastically hinder Raichu in that your benchline will get hit, you’ll potentially lose the attachments made to your Pokemon, and of course recovery: you might not be able to get your field setup back up fast enough if the opponent disrupts you enough, but then again what deck has no weakness.

Ultimately, the deck is fun, solid, and for the players online, you will have a good time finishing daily challenges with Raichu GX. Yes there’s a Static Generator deck with the Pachirisu out there, and the energy acceleration in that build can get pretty wild indeed. But in the case of this deck: it’s more durable and a bit flexible as well (for those that found success with Pachirisu, do share your decklist down below).

Perhaps someday Raichu will see some play in the meta, but right now it’s delegated to casual play, and that’s alright. For a player like me that enjoys a good Turbo deck, Raichu makes the cut.