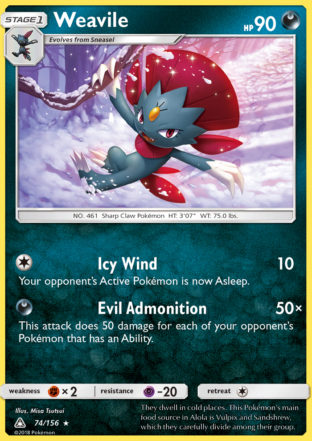 The Zoroark GX Weavile (UP) combo recently finished 1st and 2nd in Malmo and placed 18th and 48th at Collinsville, so I decided to give it a shot and see how I did with it.  I decided to use Adam Hawkin’s 1st place list since that was a little more diverse than the second place list.  Adam’s ran two Weavile, two Zoroark BKP, and a Break, while Nico Alabas’ 2nd place list ran only one Weavile, one Zoroark BKP, and no Break.  Adam’s list is here.

I went 12 W 8 L in twenty matches with this list.  As you may or may not know, I extensively track the cards I play when I’m playing my matches so I get a good footprint for seeing what I played more and what cards I played less.  In theorymon, this should give me a good insight into how to improve a deck.  After playing twenty matches, I realized there were a number of cards I could reduce the count of or cut altogether because I simply wasn’t playing them:

So those were really clear changes for me.  Usually it’s not that cut and dried.  But Guzma not being played even once, several other cards having twelve or fifteen percent proportional play rates, those are easy cuts.  A lot of times my lowest percentages will be in the low twenties – that’s when I know I’ve got a solid list, when I don’t have any cards that aren’t seeing minimal play.  Here’s my new Zorovile 2.0:

To my great disappointment, I only went 7 W 7 L with this new list.  This is a real surprise to me – when I revise a decklist like this, it usually increases in win %.  For example, earlier this month with my Golisopod Garbodor list I took to Collinsville, I had five different versions:

The jump from 2.3 to 2.4 was when I took out Trashalanche Garb and the Rainbow Energy.

So I’m not sure where my theorymon went wrong – I believe in the logic of my system, I think there are some common sense revisions I need to make to my second list.  Certainly, I’ve got to run a couple of Guzma at the very least.  I’m sure I’ll come back to this list and revise it at some point.  But I would still say that overall, this is a fun archetype and can really punish your opponent for playing Pokemon with abilities.