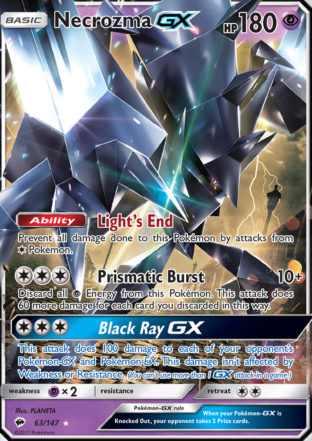 After the great success I have had with Metal Necrozma Looker – I’m now at 20 W and 5 L overall – I decided to try out the Psychic version of this deck with Lunala Prism and Necrozma GX (BUS 63).  It functions very similarly to the Metal version: hit with Necrozma’s big attack and then reload energy with the Prism card or with Oranguru’s Resource Management combining with Looker to return Max Elixirs into your hand.

Here’s the decklist I started out with:

but I did make a change during testing. About nine games in, I changed out an Oranguru for a Spiritomb (UP 53). Having the ability to go grab a draw supporter after you get N’d to a low hand count is extremely valuable.

Unfortunately, I did not have nearly as much success with this deck as I did the Metal version.  I went 9 W 8 L with this deck.  And maybe I did just have an unbelievably good stretch of good luck with the Metal variant, starting out 15 W 1 L as I basically went 5 W 4 L after that great start.

One thing I am noticing though is that I am not using Oranguru or Looker at all in this version.  I didn’t play Looker a single time and only benched Oranguru four times and not once in the last eight matches.  I did play Lunala Prism in every match except for one (it was prized), but that’s to be expected.  Maybe that’s part of the problem, but I seem to be relying more on Full Moon Star to get energy back on Pokemon.  Part of it also might be the Metal variant had that awesome strategy of letting your opponent KO a Pokemon and then you com right back and incinerate them with Sun’s Eclipse GX and still have a fully loaded Pokemon ready to KO whatever comes up next.  Part of it might be that three energy attachments only does 190 for Psychic Necrozma GX.  But it might just be that the Metal version is better.

Still, this is a fun archetype to play – Metal or Psychic – and I plan on spending more time on it in the future to see what other changes I might be able to make to get it to work even better.