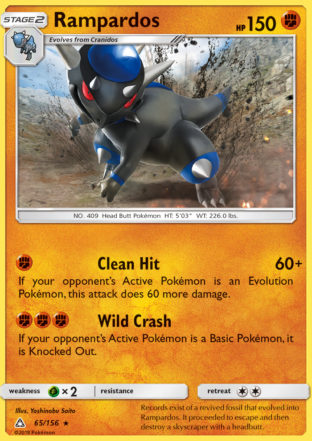 I know I don’t usually do a Saturday article, but I’ve got a HUGE article that’s getting published on Monday – maybe the biggest article ever done on this site.  I am not understating when I say that this might change the way you think about the Standard meta after reading Monday’s article.  That’s all I’m going to say about it – it’s something that no one else is doing anywhere, and it’s going to make you a better Pokemon player.

Rampardos (UP 65) caught my eye when I was evaluating the cards coming out of the Ultra Prism expansion set.  I tried it a little bit at the beginning of the month but didn’t have any success (much like all of those other Stage 2 decks I tried).  After having success with Buzzwole Garb Thursday, I decided to add a couple of Protein Shakes to Rampardos.  I don’t think I’m telling you anything you don’t already know when I say that there’s no way that Rampardos could be anything more than a supporting attacker – you can only hope to get two Stage 2’s out at most in today’s meta.  Therefore, you need another Big Basic to help fill out the deck, and this giant mosquito fits the bill.


I started Talonflame in six of the twelve matches, and I went 3 W 3 L in those matches (meaning I actuallly went 4 W 2 L when I didn’t start TF… so maybe that’s something to think about).  I only played Rare Candy three times in the twelve matches.  I would probably take out a couple of Candy in revising this deck.  I also only played Guzma a total of four times, but I’m not ready to reduce the Guzma count just yet.  Everything else had at least a 20% play rate.  I definitely liked the Wishful Batons, and it still amazes me how many decks apparently aren’t playing a single Leaf Blower.  And I saw several E Hammers sitting unused when I would go to check my opponent’s discard pile, making me again very happy that I did not carry any Strong Energy.

But this deck is just inherently not as good as yesterday’s Buzzodor deck.  Just on the face of it – Garbodor BKP costs twelve cards (4 Trubbish, 4 Garb, and 4 Float Stones).  Rampardos costs twenty – and that doesn’t include the Order Pads (which, btw I need to test.  I need to see if they might actually increase win percentage in a decklist).  Rampardos is good – 120 for a single attachment and what is essentially 250 for three attachments makes for a good attacking Pokemon.  The results speak for themselves, though.  Buzz Garb went 8 W 2 L and actually played against a meta deck.  BuzzRamp went 7 W 5 L against a whole bunch of mediocre competition – I wouldn’t call even a single deck I faced a meta deck.

But it’s a good decklist, and if you want to try out the new fossil mechanic, this is a good way to do that.