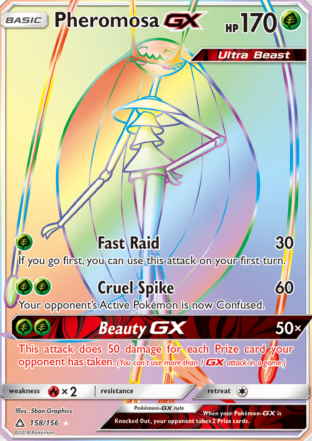 Let me start off by saying this: I wasn’t the biggest fan of Pheromosa in the beginning. She was this tall, Lusamine-like stick insect with bug eyes that seemed to want to captivate you upon first glance. Then again she did make for some pretty bizarre Poke theory material alongside the rest of the UB’s (where at the time some speculated that certain humans were either connected to the Ultra Beasts, or actually were Ultra Beasts in hiding. Case in point: Lillie=Nihilego, Guzma=Xurkitree, and even Hala as Guzzlord).
Then the Ultra Beast Promos came out and to no one’s surprise: Buzzwole/Xurkitree was the more sought after ones of the bunch. Buzzwole obviously became dominate, Xurkitree became a rogue deck alongside Wishiwashi and Hoopa, Celesteela even saw a bit of play, but the last promo was nowhere to be found in competitive play. Me being a bit of a collector, I picked up a playset of them at release and I gotta admit: Pheromosa grew on me. Now her Rainbow Rare and Full art are plain at best, but looking at her regular promo art: she looks amazing. To me she looks so innocent yet I could feel a bit of a hunting instinct behind that façade. She became my favorite Ultra Beast from then on (even the name grew on me: Pheromosa. Pheromones and Hermosa, which is Spanish for beautiful. Love it).
Now I’m not here to advocate for next Best Deck in the Format here, but I want to share a deck that I feel would be pretty fun to play with if you’re doing grass challenges, whichever ones might be. Yes Bulu outclasses her in damage output, yes Leafeon GX can get your Grass evolution challenges, but why play the same old decks when you could try out something refreshing and unorthodox, utilizing mons you probably don’t touch on so often. 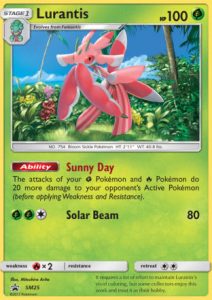 
Now the origins of the deck go back to when decklists were being composed for her, but soon after there was a dropoff and since then Pheromosa has not seen much discussion thereafter. However I always kept her around and from Crimson Invasion on, I tweaked the deck here and there to where it stands today and honestly, I love it.

I’m going to keep some of the explanations as simple as possible, since some of the deck’s components like Lele/Brigette, Max Elixirs, Oranguru, and supporters are easy to understand. The rest of the build…might be a bit unusual.

On to the star of the show: Pheromosa GX. Stat wise, her HP is on the lower end of the spectrum, but not necessarily the bottom of the barrel, and not necessarily a handicap either (you’ll see why in a bit). Now, the attack that is looked down upon: Fast Raid. “If you go first, you can use this attack on your first turn”. A base 30 attack that jabs for 30 is no pushover play, especially since you will attack regardless if you go first or second. So if your opponent has a lone Remoraid, or a lone 60 HP Rockruff…Pheromosa donks. And you have the Memories of Dawn Mew that copies your benched Pokemon’s attacks, so now you have donks against Inkays and Cosmogs. Limited donks I know, but there’s more you can do than play Happy-go-Lucky. We have Beast Energy and Choice Bands, which means your Pheromosas and Mew can potentially hit certain opening numbers against multiple opponents.
Turn 1:
• Pheromosa (mew) with Fast Raid alone, no other damage modified: 30 damage, 60 with weakness.
• With Beast Energy (Pheromosa only): 120 for weakness, 60 on everything else.
• Against GX’s with Choice Band: 60 turn 1, 120 with weakness. With Beast Energy and Band: 90 on impact, 180 with weakness.
Basically, the moment you take a jab at the opponent, you’re already prepping them up for a knockout either early in the game, or later in the game if they do not do anything to remove the damaged mon out the board.
Then Cruel Spike: 2 grass energy for 60 and confusion. In today’s Meta, we have Guzmas, we have Float Stones, we have Dawn Wings Necrozma, and even the Escape Rope and Boards among other things. So if you catch an opponent in a difficult spot, Confusion could matter. But otherwise, it’s an attack that hits decently, but adds a level of disruption in that your opponent has to swap into another attacker or risk the recoil. Coupled with the following supporter mons, you’ll find that Pheromosa hits and jabs harder and harder with every damage modifier, and the Lurantis promos with Sunny Day is the cheerleader all grass mons deserve.
Sunny Day Cruel Spike Damage Numbers (add 20 damage per Lurantis in play)
• Without Band and Beast energy: (0)60, (1)80, (2)100, (3)120 (Weakness damage: 120, 160, 200, 240).
• With Choice Band: (0)90, (1)110, (2)130, (3),150 (weakness: you annihilate all Grass Weak GX at 2 Lurantis and Band).
• With Beast Energy and Band: Don’t even need a single Lurantis against Grass weak mons: Beast and Choice Band take out Lapras, Greninja, Lycanrocs, etc. Against everything else: you’re 2HKO’ing everything else, and at 3 Lurantis you can OHKO any EX/GX with 180 Hp and below.

Now Pheromosa might be the focal point of the deck, but two other attackers on here help to pull off some amazing comebacks, to the point that they should buddy up and become their own deck for that reason alone.
Mew and Shaymin. Let’s examine why.
Cruel Spike in the hands of Mew alongside Choice Band wipes out Necrozma GX (the base form variant)…..but for counterattacks, we run the Shaymin from Shining Legends with the Rally Back attack. “If any of your Pokémon were Knocked Out by damage from an opponent’s attack during their last turn, this attack does 90 more damage”. These two Pokemon are key players to help keep you in the game, because Rally Back hits for 120 after any of your mons go down, and you are playing Mew as well so this deck can retaliate against the best pokemon in the format, and net you two more prizes for a single prize attacker. You just wipe out Buzzwoles, Lycanrocs, and Mewtwo GXs, and against everything else, Shaymin, Choice Band, and the Praying Mantis got your back. They will fight back.
Rally Back damage (Shaymin alongside Lurantis Boosts)
• Without Choice Band: (0)120, (1)140, (2)160, (3)180.
• With Choice Band: (0)150, (1)170,(2)190,(3)210. Hit the right numbers, and you will take revenge KO’s with ease.

Now to the rest of the key cards of the deck:

• Beast Ring is a 1 of for me due to the fact that I’m still divided on its use in the deck. When it goes off, it’s great. When your opponent is above 4 prizes, it’s pretty much a dead card. So for now I just run that one copy just in case. You can discard it if you so choose, but it’s good to have in an emergency.
• There are 2 Counter Energy in this deck for both Mew and Shaymin. Fact is, while you do have Max Elixirs, having Counter Energies in the deck helps to get off a huge knockout with a single attachment. Furthermore, we do run 1 Super Rod to recover a bit of resources so if Mew or Shaymin fall and manage to return for another round, Counter Energy can help you then.
• Aether Paradise Conservation Area: this Stadium is one of the most underrated ones in our meta and I personally believe that it will see more play post rotation for the damage reduction it brings to Grass and Lightning mons out there. Remember Buzzwole’s Jet Punch? While Pheromosa will likely take a heavy hit from it, the basic Grass mons on your board will be safe from the bench damage since it reduces the damage by 30. Sure Field Blowers and stadium swaps happen, but it’s better to have your own stadiums than to not run them at all, especially since you want to bump away Parallel Cities among other things yourself.
Now in terms of weaknesses you certainly won’t survive against too many Fire decks: that’s pretty much a given. And most mons here are on the frail side so my advice when piloting the deck is to play test it first to see how comfortable you are with plays involving this list and if you find yourself wanting to change anything at all, go for it.
Now I will touch on something…while I’m aware of there being a Pheromosa card from Forbidden Light, I don’t believe it’s all that good in this particular list. It wouldn’t hurt to add her however, given that she has free retreat, a solid 1 energy attack if you take the damage modifiers into consideration, and if you only need to take 1 more prize card, White Ray could seal the game in your favor. I just think that Pheromosa needs to be in a list more suited and dedicated to Beast Ring Plays than this one. Post rotation however, I will be teching her into my build so the deck will evolve, hopefully for the best.
All in all, Pheromosa and friends come together to fight as a team, and I’m just proud that I can give these Pokemon some shine whenever they earn a hard-fought victory for me. Try it out, polish the build to your liking, and have a good time!
One last thing: Beauty GX. Powerful, very powerful. Given that it’s dependent on the number of prize cards your opponent has taken, this is a solid attack that can take out threats later in the game or outright win the game altogether. Just another thing to admire about this majestic Ultra Beast today.