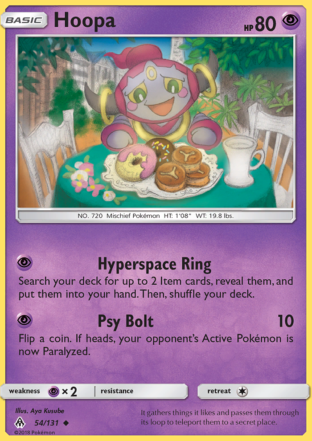 For those of you who love Hoopa, you’ve loved this past week.  First, we had STS Hoopa.  Then SLG Hoopa.  Today: FLI Hoopa.  Next week: Hoopa-EX (well, if I can get it to work with Flareon Venusaur and Mega Mewtwo EX.)  Hoopa there it is!

The minute I saw this, however, I immediately thought of Beast Rings.  Think about it: your Dawn Wings Necrozma GX or Ultra Necrozma GX or Naganadel GX gets KO’d, and you promote Hoopa.  Hoopa then gets KO’d – putting you at three prize cards – and allows you to use the two Beast Rings you grabbed as well as any you might be lucky enough to draw into.

I can already hear your counter arguments: you have to work hard to jockey Hoopa into position to be able to use its attack at the right time.  My answer: isn’t everyone playing Baby Buzzwole doing the same thing?  And that’s for just ninety extra damage.  This is to put four energy on the board.

Counter argument number 2: well, they’re just going to N you after you grab the two Beast Rings.  Answer: Decks are running exactly 2.5 N per decklist.  It’s not like a few months ago when many decks were carrying 4.  Is it a possibility?  Absolutely.  Is it a probability?  Absolutely not.  I got N’d maybe once after I played Hyperspace Ring.

Counter argument number 3: I usually get two anyways without playing Hoopa FLI.  Answer: No you don’t and you know it.  I just listened to an interview with someone playing four Beast Rings in deck and he all but admitted that he was just basically counting on getting one.  With FLI Hoopa, there were a number of times when I got to play THREE Beast Rings.  Not the majority of times, but it definitely happened more than once.  A couple of times I just didn’t have enough Psychic energy left in the deck.  Honestly, I don’t think I’ve seen my opponents get two more than a handful of times.  Most of the time it’s just one… maybe even none.  This is a good way to do your best at ensuring you get to use at least two.

And Hoopa can be used for other purposes too.  If you need to turn the game into a seven prize card match, Hoopa can go up there and get you the Choice Band and Rare Candy you need next turn.  Or the Elixir and Float Stone.  Or even Double Puzzles.  I’m telling you, this is a better card than anybody’s giving it credit for.

The downside is that you have to use Psychic energy to activate Hyperspace Ring.  Therefore, you’re limited to Psychic attack cost Pokemon.  I tried it in two matches with Dusk Mane Necrozma GX and Unit Energy – that was a big FAIL.  I tried it with Nihilego GX and Dawn Wings Necrozma GX, but they just don’t hit hard enough.  I finally tried it in Ultra Necrozma GX Malamar, and it worked fairly well.  I went 8 W 4 L, and I would say that in most of those matches when I clicked the button for Hyperspace Ring, it was like it was tied to my opponent’s concede button, because usually I would see the Victory graphics flash across the screen after my two Beast Rings were revealed.  To be honest, I think my opponents conceded too quickly (something that frequently happens on PTCGO) because I actually might not have four Psychic energy left in my deck! Anyways, here’s the list I used:

Considering I’m 18 W 5 L with my non Hoopa Ultra Necrozma GX Malamar build, I don’t think Hoopa is superior to Malamar.  I’m still working on the above decklist, however.  I will definitely come back to the Hoopa Beast Rings version and try tweaking it some.  I did not track my cards, but just off the top of my head, I would say that I’d probably drop Sophocles and a Metal energy for two Psychic energies – I definitely need more Psychic energy in this deck.  I might also turn the Energy Retrieval into an Energy Recycler.  But that’s just guessing, like I said I don’t have specific numbers to drive card choice.

Hoopa, however, is definitely worth considering, and I could see someone coming up with a VERY effective way to use this at Internats in Columbus in a week and a half!