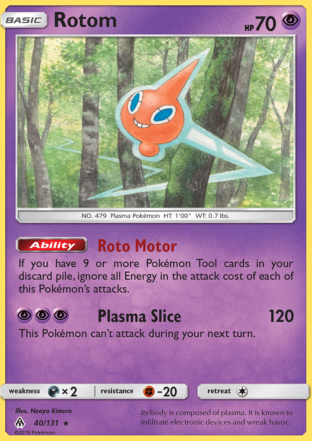 Rotom. These plasma like creatures have gotten more support in the TCG in recent months, given that the ones we got in the Sun and Moon era have one thing in common: Roto Motor. The ability to attack for free so long as you have 9 or more tool cards in the discard pile is a very steep price to pay, but to be able to attack with ZERO ENERGY…that’s just so appealing and very spicy indeed (just like Steam Siege’s very own Yanmega).

Getting off topic, the Rotoms of today’s article are some of the strangest batch of cards we ever got in the TCG in recent memory. And on the subject of strange batches of cards, I feel that the card designers for The Pokemon Company intentionally made these cards for the sake of being turned into a deck of their own (Remember the Regi Trio and the Regigigas from Crimsion Invasion? Sure wish that deck became a thing. Remember Alolan Marowak from Ultra Prism? If only he did 30 for each Alolan Pokemon you had in play. Darkrai(Alolan Muk)/Salazzle from Burning Shadows? Deck writes itself, but gets severely outclassed). Negativity aside, is a deck revolving around these Rotom any different from the examples listed above?

Now I’ve never tried Rotom out myself for the longest time, but I have looked around for any decklist that might be nice to try (including ones that incorporated the Pumpkin Bomb Gourgeist, which is a seriously fun card). But then I saw Darkintegral showcase an updated build utilizing the Psychic Rotom from Forbidden Light, and from there I decided to pilot the deck for myself.

And it was Fun. Very, very fun. 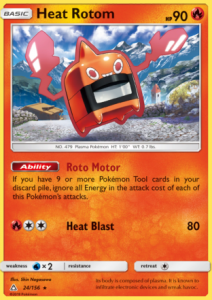 For the most part, the list is as good as it gets for a budget build. You have a good amount of Rotom to work with, multiple Rescue Stretchers to recover your mons just fine, and multiple tool cards to use or dispose at your choosing (Bursting Balloons are amazing for this list, given that if they ram into your Pokemon with the balloon on them, they take damage. If they Field Blower them off, you don’t mind. It’s perfect)! In all honesty, my only advice to give to the players reading this would be to be careful with your Choice Band and Float Stone counts, but to not hesitate to fulfill Rotom’s ability as early as possible. Also be sure to use pal Pad for Guzmas as well: gotta be sure to snatch your prey up and attack for game, but Donald does offer a good explanation for his list in the video, so it can go both ways. 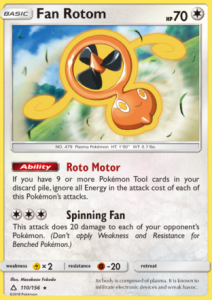 Let me just say this: This is a deck that should be used solely for the sake of fun, because with this particular build, you are somewhat having to rely on luck to take the deck to victory. Why luck you ask? Well, sometimes you’ll have to make decisions with the cards you use that you may or may not feel too sure about, but ultimately have to be made to ensure you a chance at victory. However, once you do fulfil Roto Motor’s requirement, the Rotom will reward you in return.

The two greatest strengths that I found with this build were as follows: single prize cards and weakness damage. Your opponent will have trouble wrapping the game up in a few turns, because there are no EX/GX Pokemon to exploit. They will have to work for the win.

And weakness damage…ohhhh boy. Let me get into a short discussion on the strengths of each Rotom on this decklist:

Now if you are more of a veteran to the game, the weaknesses to this sort of deck are clear as day, some more so than others, but few nonetheless. Ability lock: Garbotoxin isn’t a complete autoloss since you do run multiple Field Blowers. Not drawing into your blowers is an autoloss. Facing Trashalanche Garb is also a potential autoloss if you can’t OHKO 2 prize pokemon.  Alolan Muk: if you see this card out, you’re done. This is a Pokemon you will rarely ever encounter, but if you do encounter it, move onto the next match. Dark Decks and Fairy Decks, mainly Zoroark GX and high HP Fairies. Matches that involve Zoroarks among other things will be hard, given that you do not hit for weakness and certain builds do run Acerola as well. Now I haven’t had the chance to face these sort of matchups, but I do have reason to believe that they will be difficult for Rotom to compete against. And things like Gardevoir and Sylveon will be a chore since you also do not hit for weakness. Lastly, Weavile. Rule of Evil and Evil Admonition: you are so boned if you face these two cards. In two turns Rule of Evil will destroy your entire board, and the other Weavile can hit hard for one prize. So these weasel mons will prey upon your appliances easy.

Keep in mind however that you won’t necessarily face these menacing matchups all too often, especially when the top decks are things like Necrozma and Buzzwole right now, which Rotom can put into submission. Basically, anything that has a weakness Rotom can exploit, he will smile in delight with victory in sight.

Definitely try this deck out for yourself for the fun aspect of it all, and for the feel good attitude you will have when you win games with these little guys too. It is a deck I never thought I would enjoy, but I just love it.

Post rotation, we shall see where the game takes them.