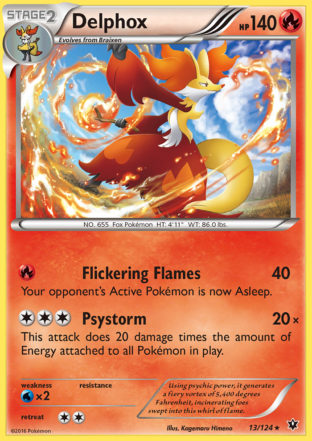 Editor’s Note: Skulk (verb) To lie or keep in hiding, as for some evil reason, to move in a stealthy manner, slink; (noun) a pack or group of foxes.

I’m just gunna put it out there: I love Delphox. Greninja’s cool and all, and the BREAK deck was one of the ones I was working to complete back when I was still starting off on PTCGO. Before that however, I had Delphox BREAK. Cheap, affordable, and overlooked for much of its time in the standard format, Delphox is the kind of deck that might seem hard to pull off but once you do get it going, especially after a BREAK or two, it begins to snowball out of control and the fun really takes off.  At 170 HP and access to a move that takes into account ALL energy on the board through its prior evolution, you got yourself a solid one prize Pokémon for the fire based daily challenges online, whether that be the damage or evolution based ones in the game.

Okay so much of the deck is self-explanatory, yet some parts might be questionable. For starters we run a 3-3-3 Delphox line alongside 2 copies of the BREAK evolution, with the Fennekin and Braxien coming from our latest set (for the higher HP), and the Delphox from Fates Collide (which is the stronger of the two that we have at our disposal).  Alongside this we do run Rare Candies and Mallow to help with evolving on up your fire foxes, as well as a 2-2 Zoroark GX line to help with fetching the cards needed to make it happen. Yes we run ways to bypass the stage 1 evolution, but with Zoroark’s Trade ability, you will need to discard cards, and that means you are free to discard Candies and Braxiens once you have everyone up.  Other mons that we use are 2 copies of Lele for the obligatory Supporter fetch, and 2 Volcanion for an added layer of energy acceleration should you need of it.

Offense wise, Zoroark and Delphox pretty much hold the fort down. Riotous Beating is a solid attack to take easy prizes early game, and as the game progresses, Delphox starts to shine. With Psystorm, you are almost guaranteed to be doing massive damage, due to the output being determined by ALL energy on the board. This coupled with DCE and the BREAK’s Flare Witch ability, you shouldn’t struggle too hard with mounting good blows, and if worst comes to pass, use Flickering Flame and cross your fingers for RNG to be on your side.

Now the draw engine on this bad boy is what really sets things up: with Scorched Earth and a Zoroark or two, you should be able to draw into what you need more often than not, while thinning through the deck as well to avoid drawing into clutter. Now this Scorched Earth/Zoroark engine might be a bit excessive, especially if you run through the energy. It really shouldn’t be too rough. Volcanion is the emergency accelerator should you burn through too much fire energy, Rescue Stretcher is for returning back Pokémon that you might need, and we do run Energy Recycler for the fact that Flare Witch requires energy to be in the deck: without a fire energy in there, you will fizzle out. Other than that, 3 Sycamore and N are there for more support (we don’t run Cynthia due to N being very appreciated when you’re behind in game).

Mallow at 1 might be incredibly low, but I haven’t had too much trouble with that: very solid card to help with setup. Wally is there just to have, but you are more than welcome to swap it out for any card that you need. Personally, I have it on standby for when I need a turn 1 Zoroark or for a mid-game evolution.  Brigette is around for your turn 1 set up, but do not hesitate to fetch a draw supporter using Lele if you’re unsure of your hand for the following turn: universal rule for when deciding on Brigette or draw on your first turn (IMO of course). Lastly, Guzma is there for the sake of being Guzma: drag back up 2 prizes or to get out of a stall tactic.

Onto the cons of this deck.  It has an unfavorable matchup against ability lock, given that the build does not run field blower to counteract Garbotoxin. Yes, you can still fight on with your Delphox if you feel that you have a chance at winning, but if facing Garb in conjunction with strong single prize or single energy attackers like Trashalache Garb or Lucario, it’s not too pretty. That and parallel city restricts you heavily as well, so bear that in mind when making this list your own: swap out anything on this list to add the field blowers if you so desire.

With all that said: give this build a try for old times’ sake: if you’re a fan of this magical, wizardly fox, send him off before rotation later this year. The BREAK era will finally end soon.

On a side note: if you would rather play Delphox in expanded, you do have a greater shot at setting up your board, given that X and Y’s Delphox is a stage 2 Octillery with a very decent attack as well. Coupled with Vs. Seekers, Teammates, and puzzles, it can take off fairly quickly…just bear in mind that Expanded is a nastier, merciless format, full of Zoroarks, Night March, and Item Locks. Also, Forbidden Light’s Delphox: in theory, you could tech this version in as a 1 of for the sake of Burn damage (and Zoroark will do 180 in total if you have a full bench, Choice Band, and the burn).  Is it worth it, probably not: stick with Psystorm-phox.