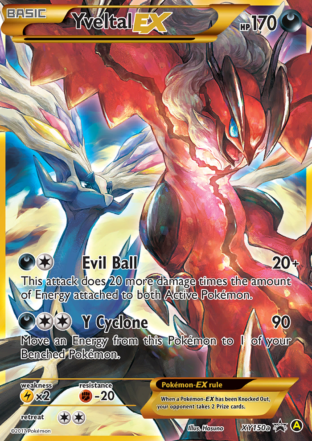 Recently on Pojo.com, we reviewed Yveltal GX.  To no one’s surprise, that Pokemon simply can’t function as a feature deck in today’s meta.  At one point in the review, I commented that I thought you would have more success with Yveltal EX than with GX.

And I was right.

Yveltal is still really good paired with Garb, and I’d bet there’s a better list out there.  Choice Band might be better than FFB, but that boost in HP made a HUGE difference in a lot of games.  I just know there were several times when I was hoping my opponent wasn’t playing Field Blower not just because of breaking ability lock but also because there were between 170 or 180 damage counters sitting on my active Yveltal.

People love playing with abilities, nobody wants to run Garbotoxin Garb… it’s just not as much fun.  Plus, I did demonstrate in one of my earlier meta analyses that Garbotoxin will help you get into the top 64, but it had a HUGE dropoff between top 64 and top eight.  Despite having a relatively large representation in successful top 64 lists, BKP Garb almost never made it into the top eight.

But like I said, feel free to add and subtract cards as you like, I don’t think this is the best list, this is just the one I went with.  Good luck and have fun with a pretty good throwback deck.