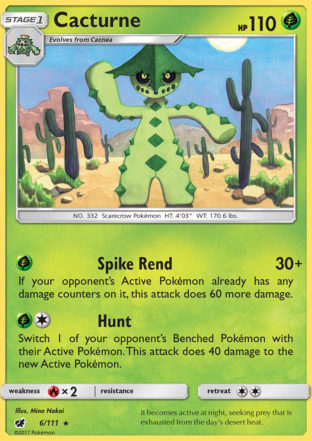 So way back in November 2017, I tried this dynamic duo out and went 7 W 8 L with this decklist:


We finally got around to reviewing this deck on Pojo.com, so I decided to try it again this weekend to see if it might have gotten any better in the seven months since I last tested it.  Unfortunately, I had no more (and probably some less) success this time than I did last time.  I went 4 W 6 L with this decklist:
Click to see deck list


I did actually win two wins against Buzzroc decks, but I also lost two matches against Greninja decks.  I think those two losses speak to the limitations of Cacturne Decidueye.  Normally, a Grass deck is an autowin against Greninja.  That I lost both matches indicates that this deck is not really competitive.  It might get you your daily challenge on PTCGO, but I wouldn’t dream of taking it to a tournament IRL or online.  If I had won one of those matches against Greninja, I would have gone 5 W 5 L and maybe I’d be thinking more positively about this deck, but the way I look at it, if you can’t win one out of two matches in today’s meta when you have the weakness advantage, well, sorry but you’re just not that good of a deck.

But at least it’s here.  If you’re ever looking for a Cacturne list, well, there you go.  Maybe you can tweak it and make some adjustments that might make it a little more competitive in today’s meta.