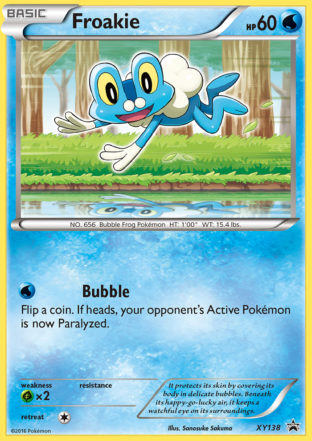 I actually didn’t start playing Greninja until about the middle of October in 2016.  I remember that rotation, I came out of the gates blasting away with Mega Mewtwo EX, winning more than 80% of my games in the first two weeks of September 2016.  I’ve never had such a high win percentage over such a period of time.  Then, around the middle of September when people started to catch up with M Mewtwo, I switched over to Volcanion.  I had quite a bit of success with that in late September and into early October… but there was always one deck that I couldn’t beat.  There was one game with Volcanion where I got so frustrated that I had to go filter on my records for all of the matches I had played against this deck and see if I had won any with Volcanion – and in (I think) seventeen matches, I had lost every one.  Every time I played against Greninja, it had beaten me – and we all know now that this shouldn’t be a surprise – but that’s when I decided to try out this deck for myself.

I remember worlds in August 2016, I had just discovered PTCGO videos on Youtube, and I had watched Greninja get demolished by Mega Audino in the finals.  I had walked away less than impressed by Greninja for the same reason that everyone else shunned it – this deck bricks harder than any other deck in the history of the game.  It is the ultimate come from behind deck, but far too often you can dig yourself into too deep of a hole.

I grew to enjoy it, however, even despite being in an era where Tool removal was unavailable (September 2016 to January 2017) AND the golden age of Grass decks (February 2017 to August 2017).  Then Giratina Promo was created exclusively to counter Greninja, and yet it still found ways to survive.  It didn’t win many events, but it always seemed to have some high placements.

It had a variety of different partners, from Talonflame to Tapu Fini GX, but my tech of choice was Alolan Vulpix.  Had it entered the meta back in May, I might have tried it with Dunsparce, but Vulpix’s Beacon always served me well.  You’ll see in the video below that it plays a major role in helping to develop Pokemon, and it has worked well in the limited number of matches I have used now in my Swampert builds.  Actually, Swampert is almost becoming the new Greninja in that it is also a come from behind deck.

I had tried Wally a while back – I can’t remember exactly when – but I found that I just couldn’t get the turn 2 Water Dupes consistently enough, and later in the game I needed to use Supporters like Fisherman and Skyla and N more than Wally.  However, since the announcement of Wally’s banishment from the PTCG, I’ve been trying it with Greninja and having some luck with it.  I didn’t manage to get a turn 2 Water Dupes in the 3 games I recorded, but they are still good matches (well, 2 of them are at least), and I hope you enjoy this farewell to one of the most creative, unique archetypes the game has ever seen.