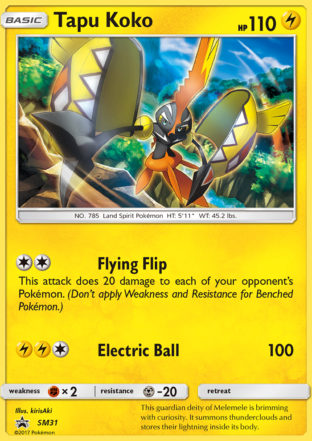 I’ve been pretty outspoken about how I feel about Shrine of Punishment, but let me say it again so there’s no mistaking my meaning:

Please don’t take this as boastful or cocky or arrogant.  This is a fact, plain and simple.  I am now on a twelve game winning streak and just won a PTCGO tournament with this list:

I went on a ten game winning streak with the Koko Honchkrow list I published the other day.  I did notice, however, that Honchkrow has a little inherent counter synergy.  If you KO something with damage on it, you’re kind of working against yourself.  So I tried a pure spread deck, a deck where I just try to dump as much damage as possible all over the board, turn after turn after turn.  You can see in the video below that this deck is working pretty well.

I’ve also noticed a number of times when my opponent tries to get cute and just leave out a single Pokemon.  The problem is – and you see this in the video – but Tapu Koko and Oranguru can both potentially fight as normal attackers.  Electric Ball does 100, and Psychic frequently hits for 100 or 120.  There have been a number of matches where my opponent left a Baby Buzz or Tapu Lele GX or Sceptile in the active, thinking that I wouldn’t be able to beat it only doing 20 damage a turn.  My opponents undoubtedly learned the error of their ways when a Koko or Oranguru gets promoted into the active and I attach a Counter Energy, activating the above mentioned attacks and KO’ing their only Pokemon in play.

And many times I also drop a Fairy Lele on the board early.  My opponent Guzma’s up the Lele and KO it, but that just means they’re not KO’ing something with energy attached to it, and that frees me up to make sure I can continually stream attacks turn after turn after turn.  Then at the end, I can pull Fairy Lele out of the discard with Rescue Stretcher, promote her, click on Magical Swap, and then count the coins and points I move up the ladder from my victory.

I decided to add Fan Rotom because I was looking for another spread attacker and I realized that Fan Rotom could potentially do that.  However, Fan Rotom’s greater value is in that it gives me another free retreat Pokemon that I can start a game off with and not have to worry about how I’m going to get it out of the active position.  I do attack with it sometimes, but my primary attacker is Tapu Koko.

So give this deck a whirl, hopefully it will help you climb up the ladder as much as it’s helping me!