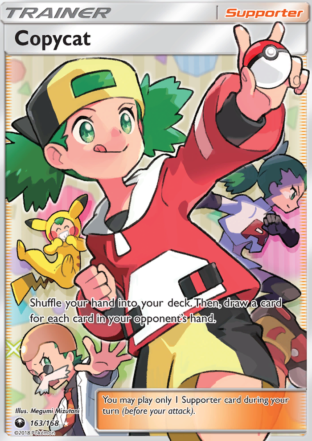 We lost Sycamore and N, and one big question that confronted the meta was, “Will Copycat be an adequate replacement for those two draw supporters?”  Initially, it looked as if it might slide right in as the heir apparent, but we actually have a number of other Supporters that have stepped up to give it some competition:

So how does Copycat stand up when compared to these alternatives?  I’ve thought that it would largely depend on exactly how many cards it gets you per play.  If it only gets you something like five and a half cards on average, Tate & Liza might be the better card as that also provides a switching option.

I tracked Copycat for every time that I played it and when my opponent played it as well.  I started last Tuesday when the new rotation kicked in, I wanted to make sure any tracking wasn’t potentially skewed from being in the old format.  Here’s what I found:

Here’s a breakdown of the stats:

So there you go – there are the numbers for you.  You decide whether or not you want to run it, and how many copies you want to play.  Clearly, it can put a LOT of cards in your hand.  And if you’re running double Oranguru, drawing only a couple of cards isn’t really that bad because Instruct can then potentially grab you a couple more.  So you make the call, and let me know what you think!