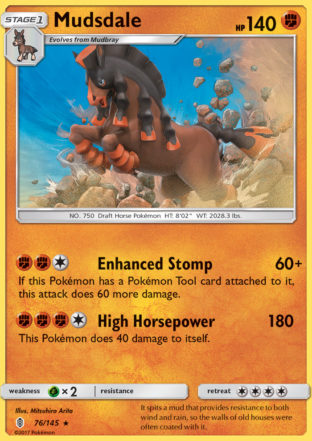 Everyone loves the Budweiser Kleidsdales – Mudsdale (GRI 76) is Pokemon’s version.  I’ll admit that I’ve underrated this Pokemon – I’ve always passed it over because the attack cost seemed WAY too high.

Not with Dragon’s Wish Dragonair (SUM 95), now throw in some Counter Energy and Ribombee (BUS 96), and getting four Fighting energy on Mudsdale is easy peasy.

I will definitely say the three games on this video were against non meta competition. Mudsdale is NOT the BDIF!  But it is better than I thought it was, and it will win you some matches.  Overall, I went 6 W 4 L and did beat a Buzzwole Garbodor deck.

Link to the video: