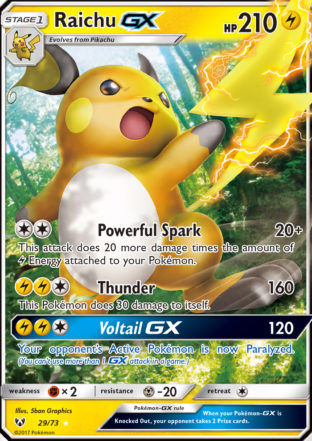 Who remembers the day Raichu GX had a lot of hype behind it? I do. I remember the first time I pulled a Raichu GX in real life, the glorious time. I dominated my family’s decks every time. And my deck wasn’t even that good. (That all came to an end when someone stole mine)  Then, when I first pulled one on PTCGO, then traded my Shining Jirachi for 3 Raichus. Then when Pachirisu came out I was so happy! The deck would finally be good! Magnezone, yes please. Then on that depressing day when Nuzzle Pikachu rotated out… I thought my favorite electric mouse would never be played again. Then, when Zeraora GX was released, I knew this mouse had hope. So, now let’s see how Raichu could be a good partner for Zeraora!

Zeraora is a basic electric Pokemon with 190 hit points, an ability, and two attacks. Its ability is Thunderclap Zone, and it says that any Pokemon that has any [L] energy attached has no retreat cost. Now, it doesn’t say BASIC energy, so I’m assuming that Unit Energy would work, and I’m sure Harvey would correct me if I’m wrong. Its second attack Plasma Fists does 160 damage and the Pokemon can’t attack next turn. Pretty good, like Buzzwole and some other GXs. Its final attack is Full Voltage GX, and it lets you attach 5 basic energy cards from your discard pile to your Pokemon in any way you like. Now, this is what I like about Zeraora the most. Turtonator GX has always been one of my favorite cards, I played a pretty good Volcanion EX/ Turtonator  GX Ho-Oh GX deck before Volc rotated out, and its GX move Nitro Tank was the best part about it. This helps a lot for setting up Raichu in the early game to come in sweeping. Granted, with cards like Max Elixir gone, it’ll be pretty hard to accelerate energy outside of Zeraora, but we won’t need to as much because of damage boosting cards like Choice Band and Electropower. Now, I can’t tell you my experience with this deck (I don’t have all the cards in my decklist below), but I can assure you that both of these cards are good based off of YouTubers videos on them. So, I’d like to thank Harvey for letting my write my FIRST article and to you guys for reading it, and have a good day. 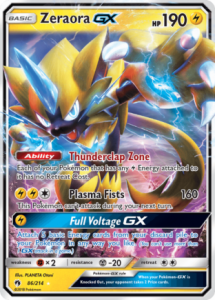 Editor’s note: To the best of my knowledge, if you have Zeraora GX in play and Unit Energy [L][P][M] (Ultra Prism UPR 138) attached to a Pokemon, that Pokemon would have free retreat.  Unit Energy ONLY has a Color if it is attached – if it is in the deck or in the discard or in your hand, it is a Colorless energy card.