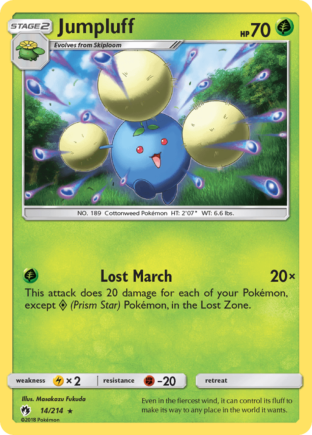 Alright so I decided to bite the bullet and get three Jumpluff and try out Lost March.  I didn’t particularly enjoy it and I found that it somewhat underperformed.  It has more limitations that didn’t initially occur to me.  I had a number of matches where pieces of the underlying Jumpluff line were prized – a couple Hoppips or a couple of Skiplooms – and that’s led me to believe that Natu might be the real attacker in this deck.  I rarely was able to get all eight Hoppip and Skiploom into the Lost Zone.

But overall  I just didn’t really like it that much.  It’s very clunky and has a very constructed, inorganic feel to it.  Here’s the list that I used – and I’m sure this isn’t the best list, I’m sure that there are other people who will come up with better 60 card lineups than this. 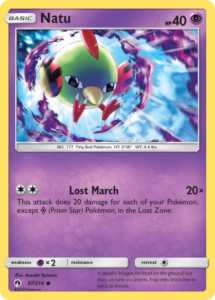